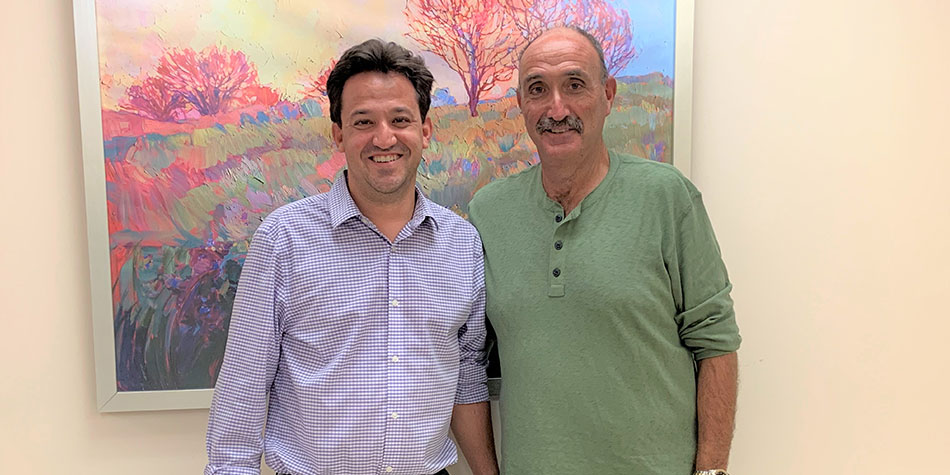 Dr. Stephen Krasner was overjoyed when his son joined him at his practice after he graduated medical school and completed his training. I sat down with both of them to talk about their chosen professions of cardiology, and their professional and personal relationship as father and son. Please feel free to utilize any of the quotes below.

Q. How has your father inspired you to be a cardiologist?

A. I just watched him my whole life. I was always interested in doing medicine. I know he worked hard. I always knew I wanted to be a doctor just watching what he did, watching his routine. I liked the satisfaction he got from taking care of his patients. When I went into medical school, it was the only thing I was interested in because I had always heard the same words over and over, listening to him on the phone, and it was all starting to make sense to me. That was a pretty easy decision for me.

Q. What’s it like working so closely with your dad?

A. I love working with him. We have a very similar work ethic, so we kind of have the same ideas on how we want the group to be. It’s always great to hear patients say, ‘Hey I love your dad’ and vice versa with him. He gets a lot of feedback when I take care of his patients in the hospital. They say things like ‘I like seeing your son,’ so that part of it is awesome. I’ve been able to watch how he works and take some of that into my own work. I didn’t interview anywhere else, I even told my program director that this is where I’m going. I’ve always wanted to work with my dad and I think he’s always wanted to work with me. It’s worked out really well.

Q. Separate from working together in medicine, how would you describe your relationship with your dad?

A. My dad’s my best friend. We talk every day, multiple times a day. If anything happens in my life he’s the first person I call. It’s great to be able to bounce ideas off of him and he doesn’t care when I call him or how late I call him.

Q. How do you feel knowing that your son followed in your footsteps into medicine, particularly cardiology?

A. Knowing that he’s following my footsteps makes me feel great because it means that he’s in it for the right reasons. He would come round with me a lot on the weekends, and I remember taking him when he was about 8 or 9 years old, and he wasn’t sure exactly what we were doing. That weekend as we were walking out, they called a cardiac arrest in the ER and there was a 45 year old with an inferior wall MR. We ended up cathing him. He’s (Dr. Andrew Krasner) sitting at the nursing station in the ICU and he sees this guy who was basically dead come back into the unit perfectly normal and his wife’s hugging me because he had a cardiac arrest, and on the way home, he said to me, ‘I didn’t realize what a neat job you had.’ This verified that I was showing him the good stuff in medicine. He’s exceeded my expectations. I knew he was going to be good, but I never thought he’d be as good as he is. He’s the best guy we’ve ever brought into the office. He knows I love my job and I think that helped encourage him to do it.

Q. What’s it like working so closely with your son?

A. I love it, I love it. Just hanging out, doing the practice with him, I’ll probably do it for a long time.

Q. Separate from working together in medicine, how would you describe your relationship with your son?

A. My daughters always joke that he’s my favorite, but that’s obviously not true. We have a very good relationship. I coached him when he was a kid in basketball all the way through high school. Actually, our cardiology practice even sponsored the team. On the days that we had a basketball game I would round starting at 3am, in order to be able to break away to get to his basketball games on time.

4 steps to help you embrace change

June 15, 2020
Change can be difficult no matter the circumstances, but the coronavirus pandemic has caused many changes to daily life in recent months. Learn...
Next Post
Back to blog home

The depression and heart disease link

Parenting and coronavirus: Caring for children during COVID-19

How to know if you have celiac disease, a gluten sensitivity or a wheat allergy